When my sister (who lives in California) asked me what I was doing over the weekend, I told her I was going to a pizza farm and she’s responded: “What in the heck is a pizza farm?”

Being in Minnesota (but also so close to Wisconsin) I took for granted the normality it was for someone to just simply drive to a barn and eat some pizza. But it’s honestly one of my favorite things to do in the summertime!

Eric and I went to our first pizza farm a couple years ago and I was hooked. It was probably one of my favorite dates we’ve ever had in the last 5 years so needless to say I was itching to go again! This time we planned out our day to end at the Stone Barn in Nelson, Wisconsin. The whole route is along the Mississippi River and we decided to adventure down on the Wisconsin side of the river. See below for the stops we did along the way!

Prescott for Coffee at Twist Oak

Plan to leave the cities early to mid-morning (we left a little late and we’re already wishing we would have left earlier!) and make your way right across the border into Prescott, Wisconsin. It was an absolutely beautiful day so we stopped at the waterfront to watch all the boats go by for a hot minute. I can’t really do much before I have my latte for the day so we pulled over on the main drag to Twisted Oak Coffee House. It’s in a shared building with another business across the hall from it. Step inside to see just how cozy it is inside! Order an iced latte of course, but try a pastry or two – they looked delicious! The girls working were so kind to me as we chatted for a few mins. I left with my latte in hand topped with my favorite – a chocolate-covered espresso bean!

After you leave Prescott, head down the road to Hager City to Hager Heights Drive-In. It’s right off the highway and you can’t miss it when you look to your left and see a giant chicken! You can stop and sit down to eat or you can head on through the drive-thru too. Make sure to bring cash as it’s a cash-only establishment, but they do have an ATM on the property too.

Next, you’ll pass through the small town of Bay City, right along the railroad tracks. You’ll spot an ice cream shop which sadly has been closed since the last time I visited but it has a cool old train car parked next to it! Right before you leave town you’ll spot the bright yellow sign titled “Old Stuff” with a bike in front. It looks just like an old house – but then again that’s exactly what it is. An old house with old stuff. The duo running it are the sweetest couple who’s had the property for over 20 years. The space actually used to be an old gas station too! Their collection is so unique and even if you aren’t the biggest fan of antiques, there’s is definitely something there for everyone. I’ve snagged a pineapple pitcher and new plates for our kitchen there! Now for a bonus stop..

If you are lucky enough to be there during the hours it’s open… Stop at Chef Shack. We JUST missed it but they are open from 10-2 on Sundays! 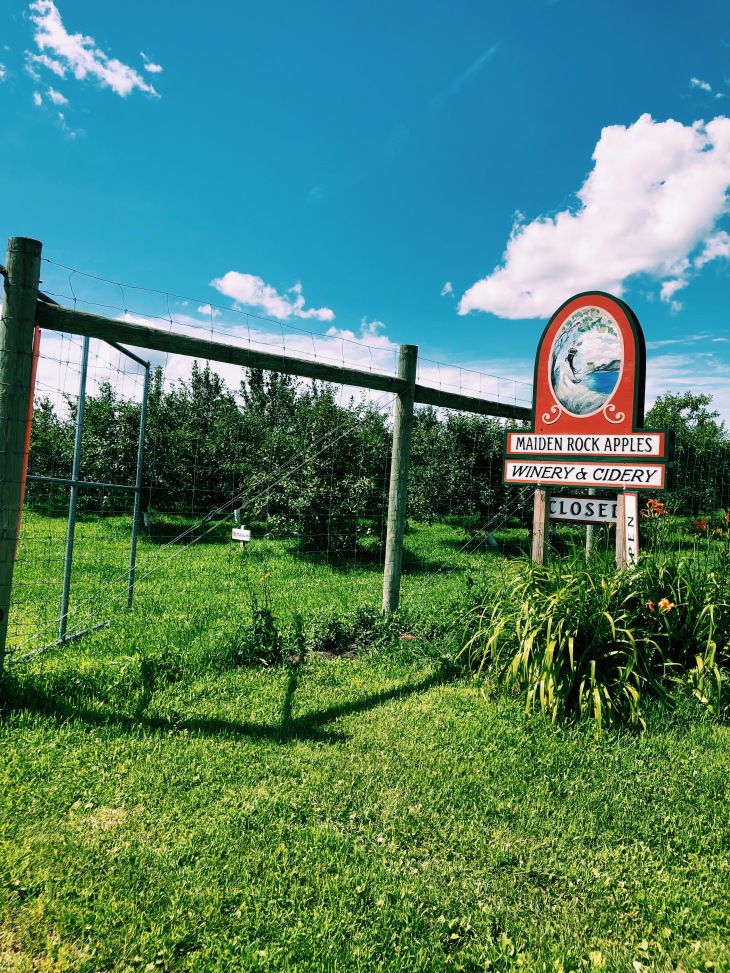 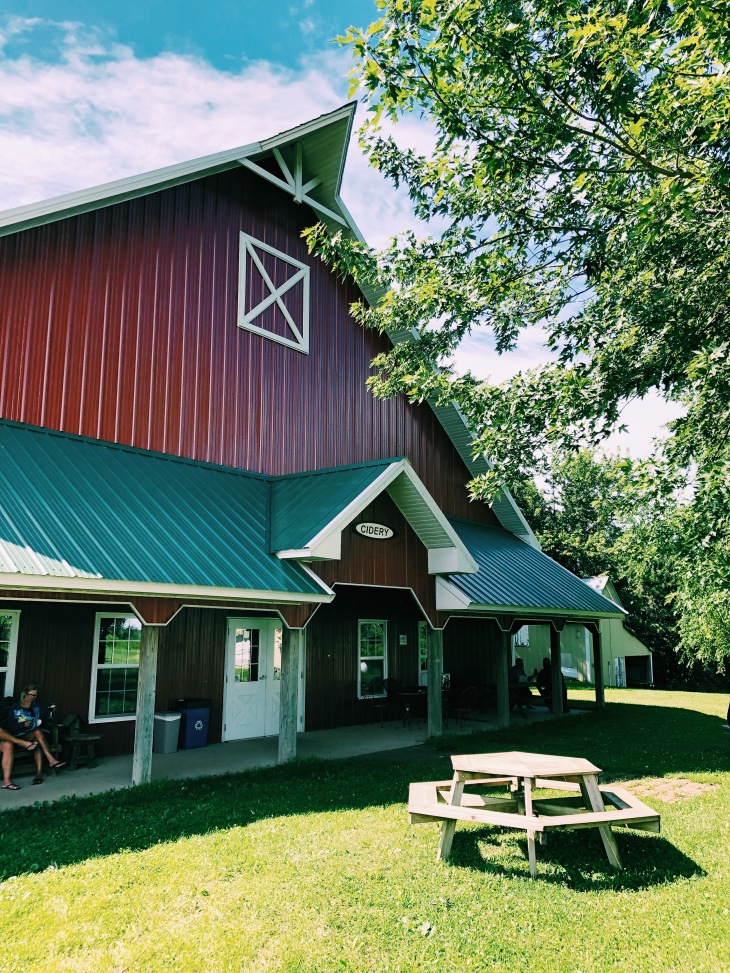 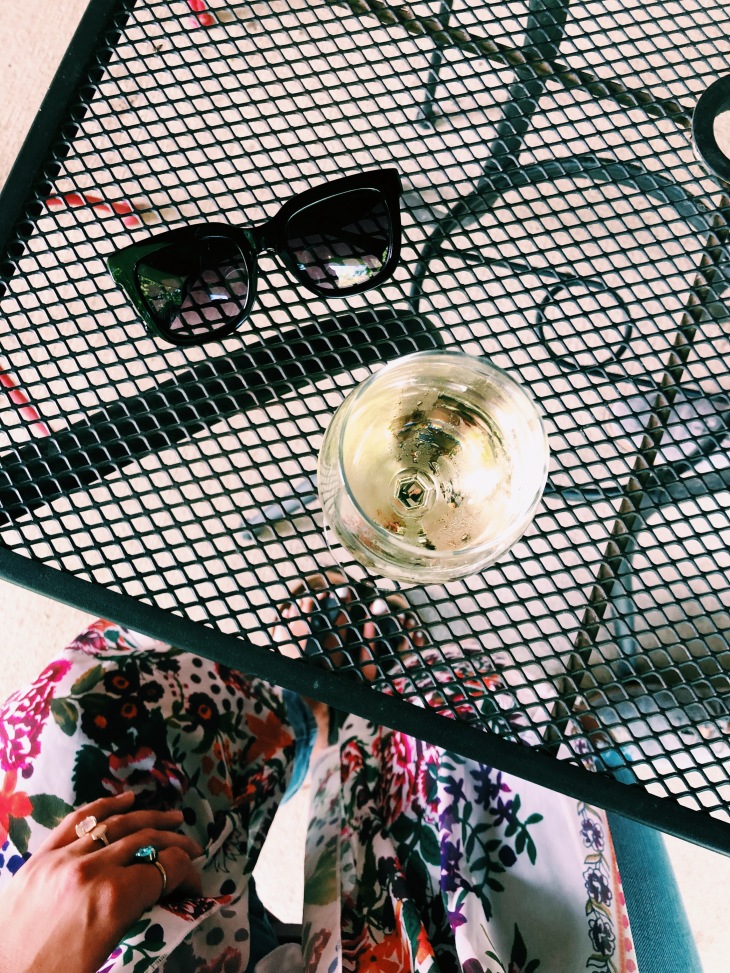 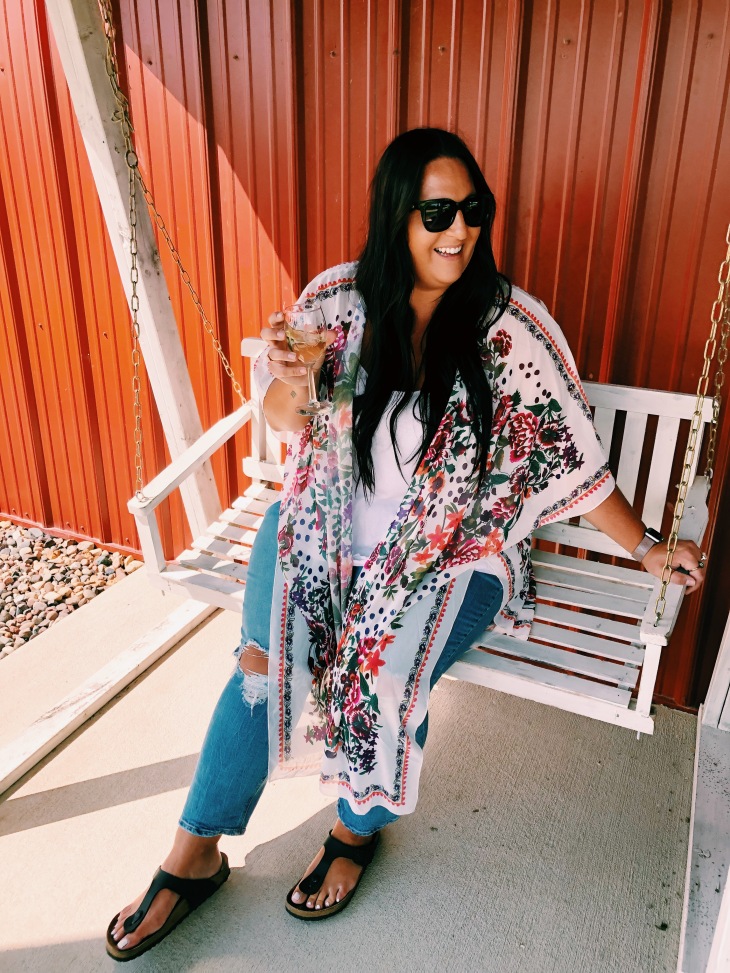 It was officially the afternoon and I was really wanting to get the Sunday Funday going. There are a handful of places to stop and drink along the way but since it was Sunday we were a bit limited on time. I am a huge cider fan, so we drove off the main highway to follow the winding road to the Maiden Rock Winery & Cidery. Nestled off the road, you drive up to a big red barn that simply reads “Cider.” Simplicity is the theme here as they don’t need much to bring people in! It was pretty quiet when we arrived but within 20 minutes I think 5-6 more couples came wandering up. The staff there are super helpful and can point you in the right direction of what wine or cider to have! You are able to have 3 free samples, which is plenty to decide on what you want to have a full glass! Each glass is extremely reasonably priced too. I went with the Honeycrisp Hard cider (my favorite apple of course). They have an awesome retail section of apple-flavored jams, butters, BBQ sauces, and more. Snag some of those but also some cider to bring home. Oh, as a bonus they also have limited edition New Glarus flavors you can purchase there too!

Stockholm for some Swedish Charm 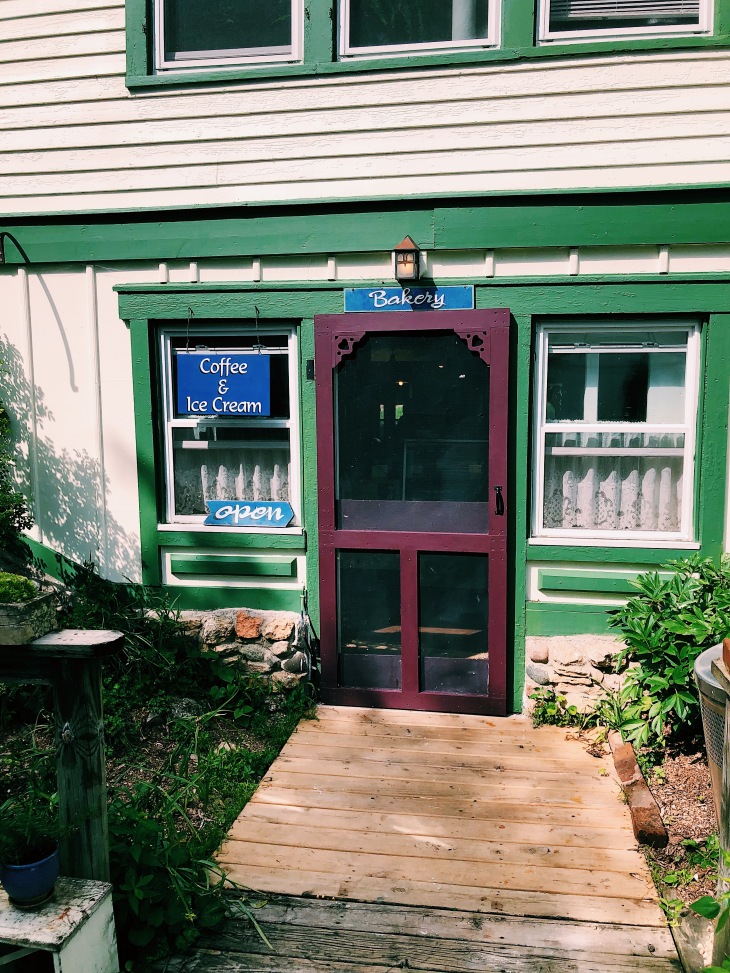 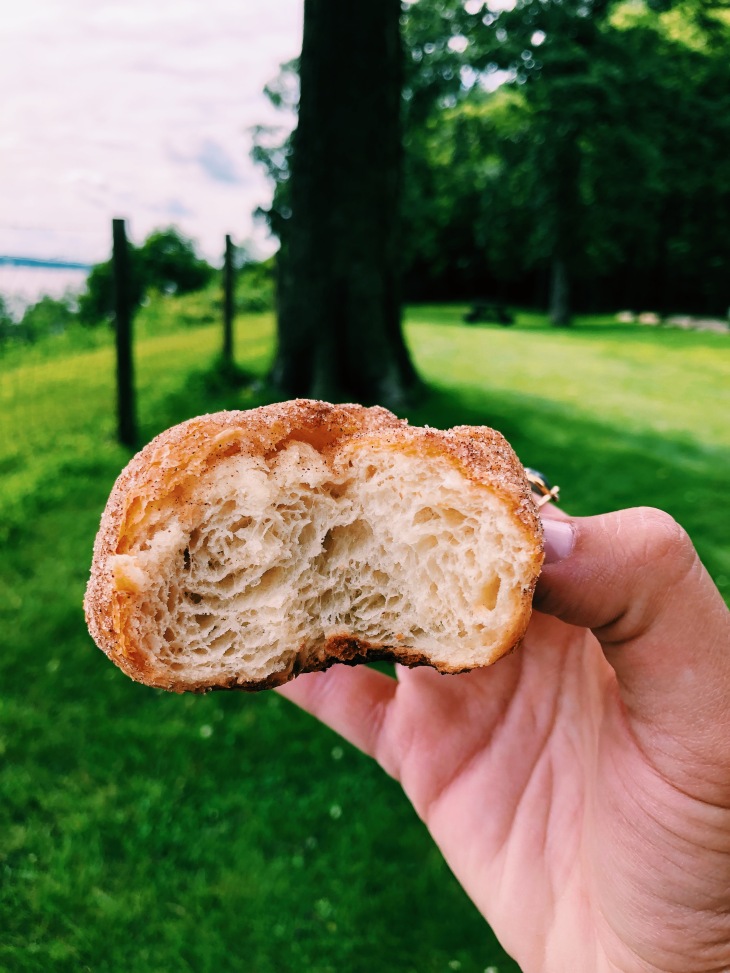 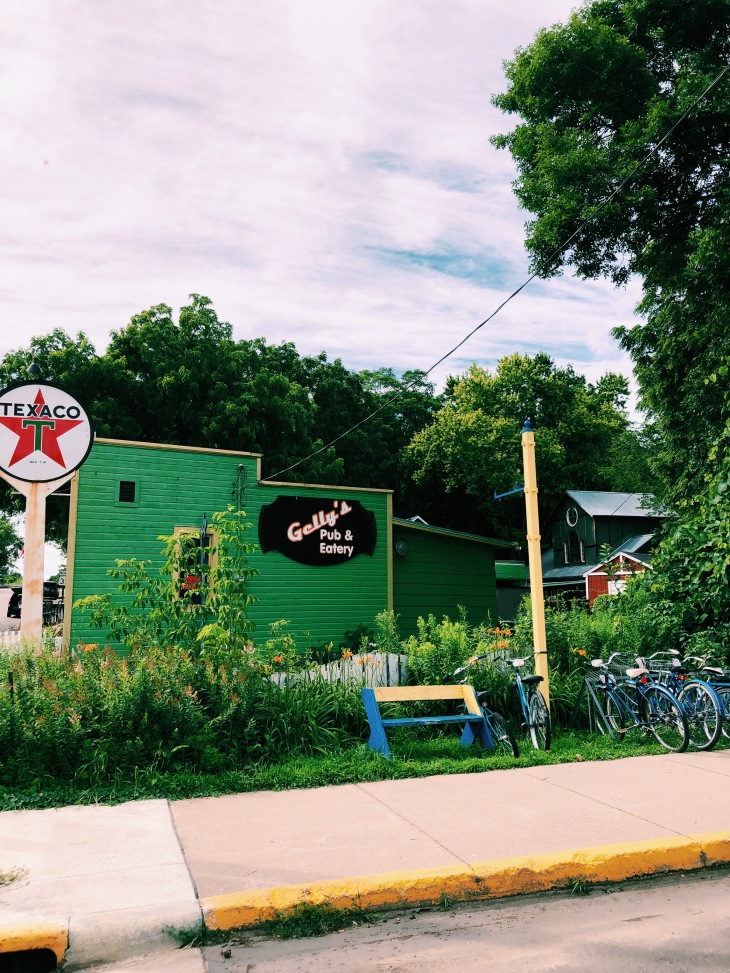 On our way out from the cidery, we went the other way and meandered right into downtown Stockholm. This town was bustling when we arrived around 4:30! You can definitely tell the Swedish influence here. The street was lined with motorcycles and families alike stopping at the little shops, bakers, and of course the Pie Shop! I heard people talking about the Stockholm Pie Shop when we were at the cidery so I figured I had to stop by! But first, we popped into a unique store filled with art and local goods call Har-nes, and then I went up to a little bakery to try a Swedish donut. One word: YUM! I popped into the pie shop and WHOA it was busy. I ended up walking next door to the Stockholm General Store to shop and get some freshly made chocolate goodies!

Nelson for all the Creamy Goodness 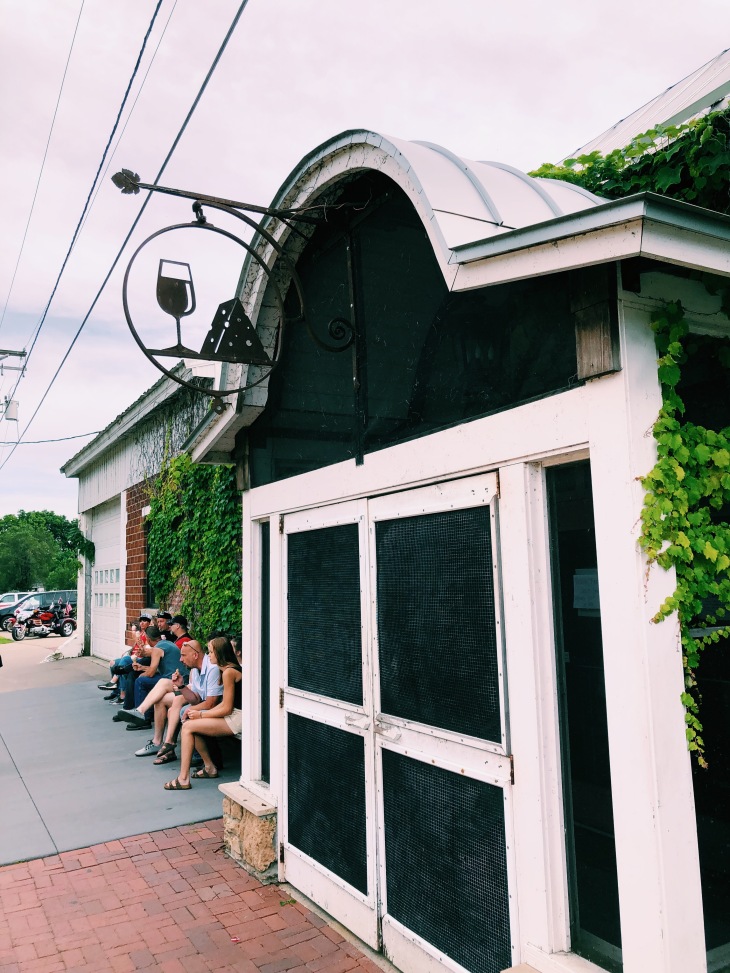 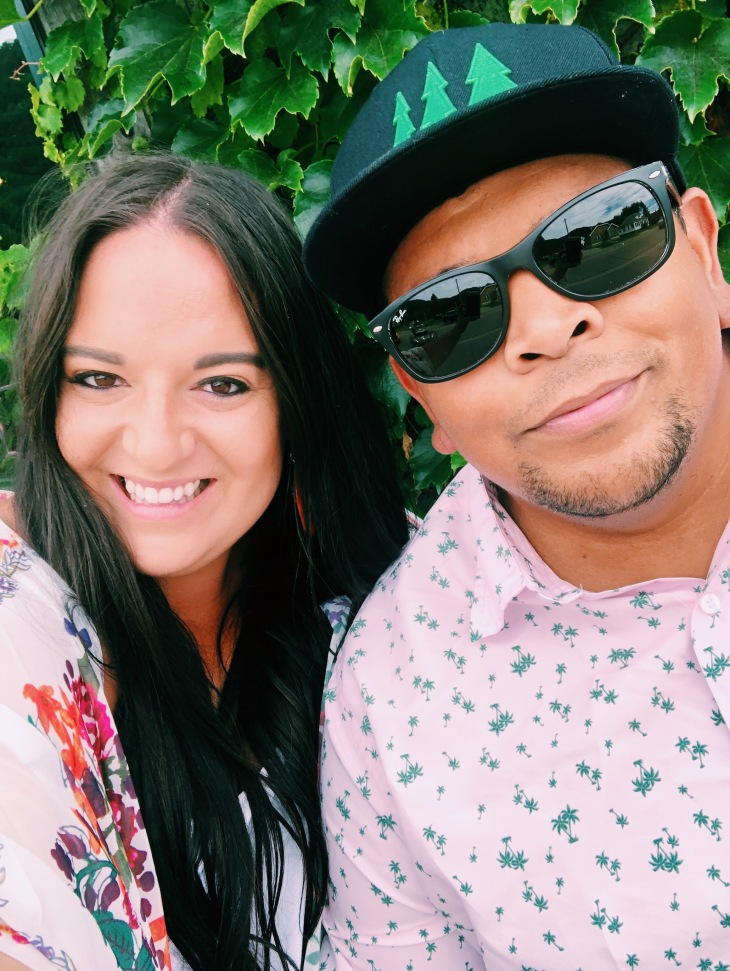 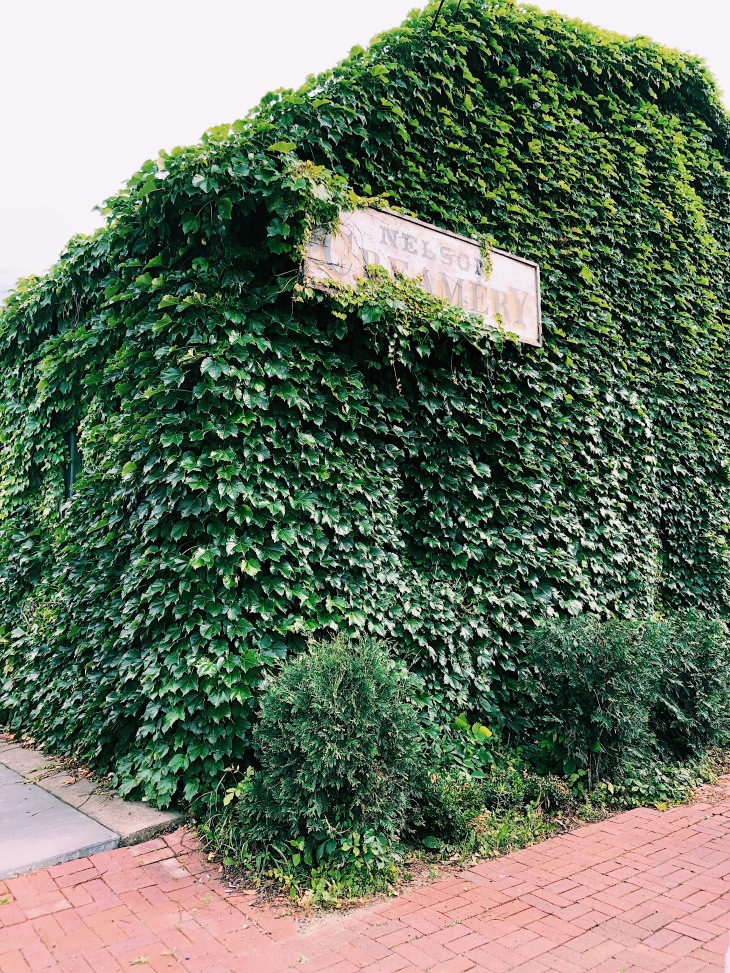 I kept my sweet tooth going by stopping in the actual town of Nelson to their creamery. It worked out perfectly since we were visiting on National Ice Cream Day! We perused the shop and purchased some interesting lamb summer sausage, a beautifully aged cheddar, and some cheese curds! I weaved my way into the line for ice cream to scoop up some mint chip and oh my goodness. It was delicious! We sat outside on the bench and just enjoyed the beautiful weather. There’s plenty of space inside as well to sit down and have a meal there too! 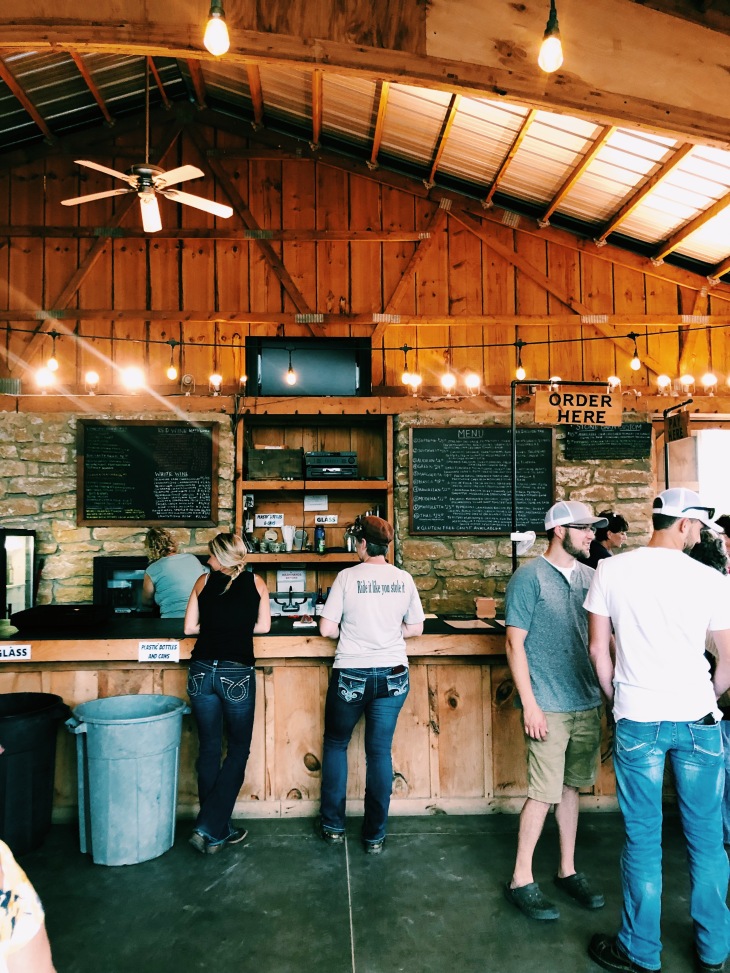 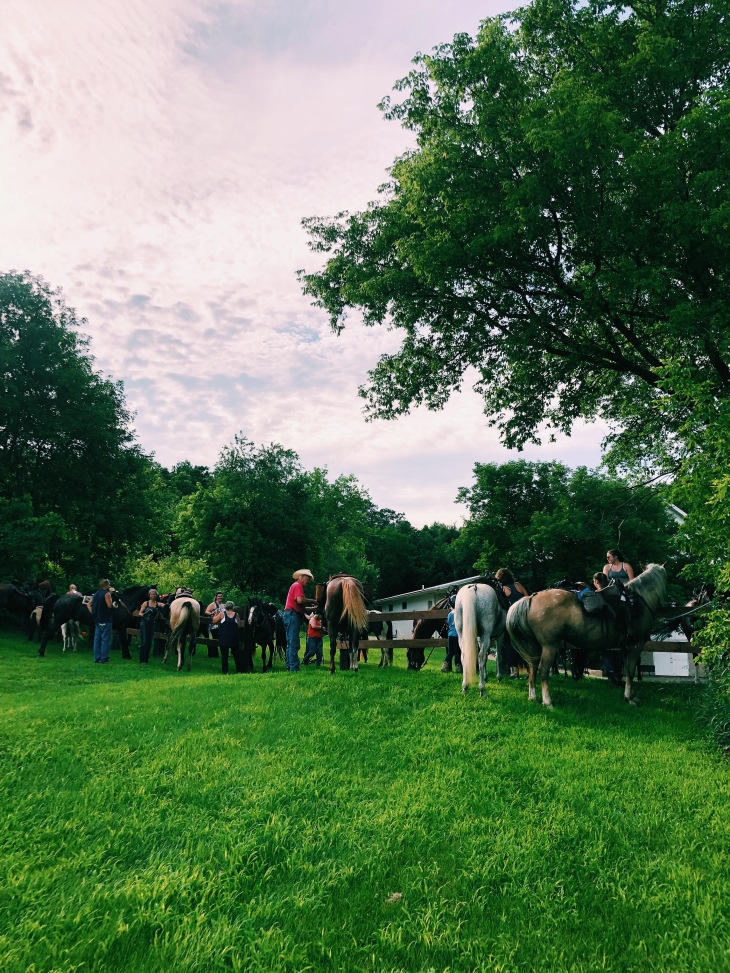 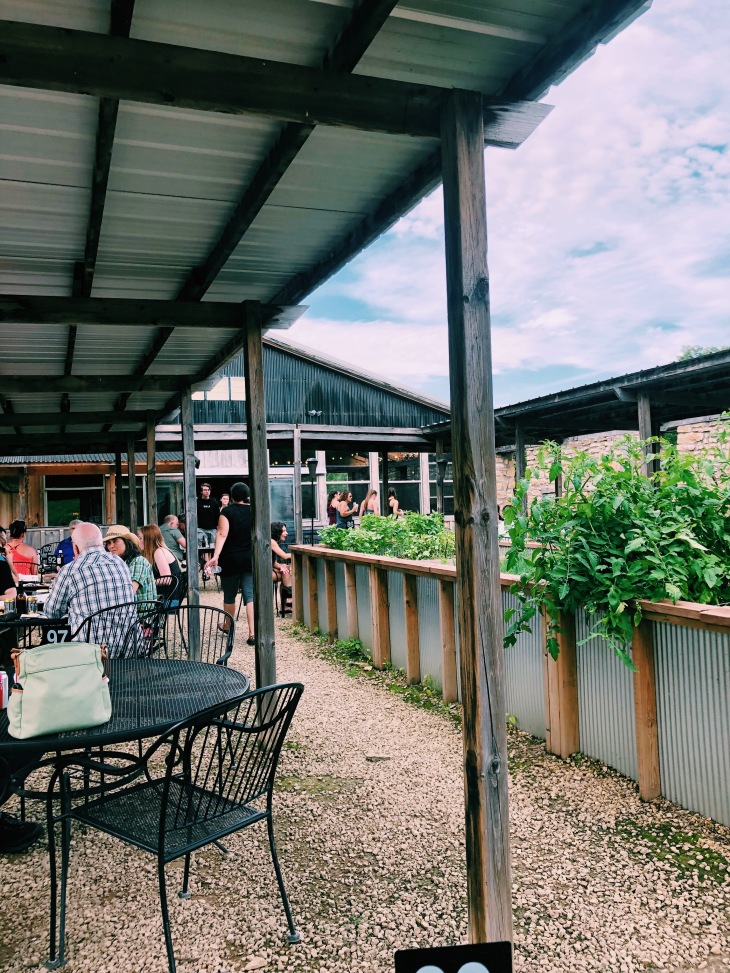 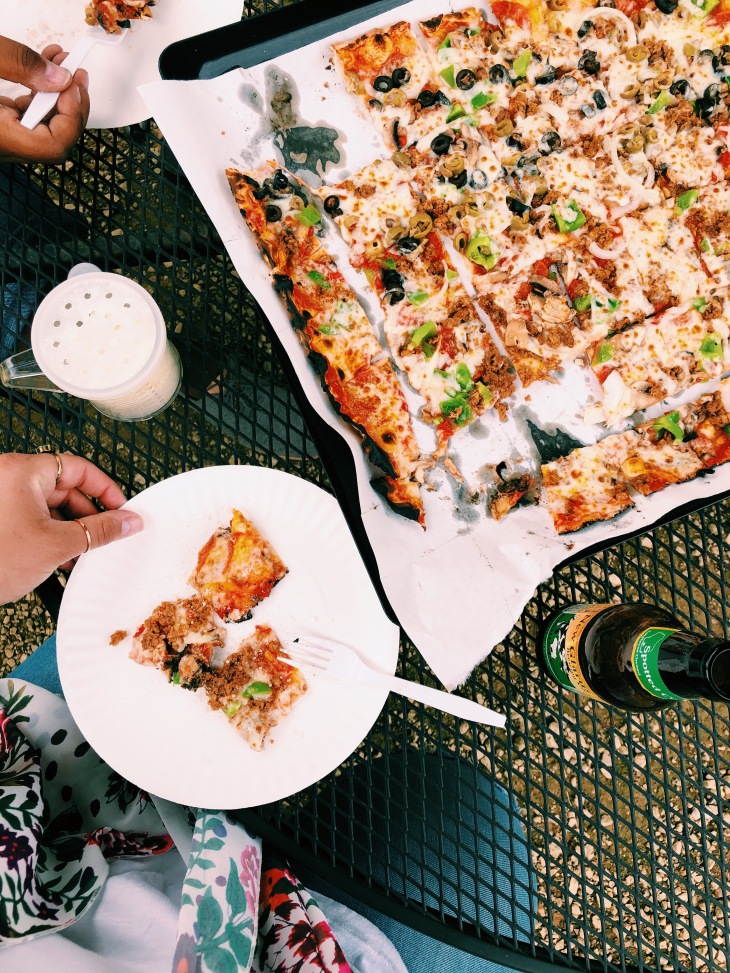 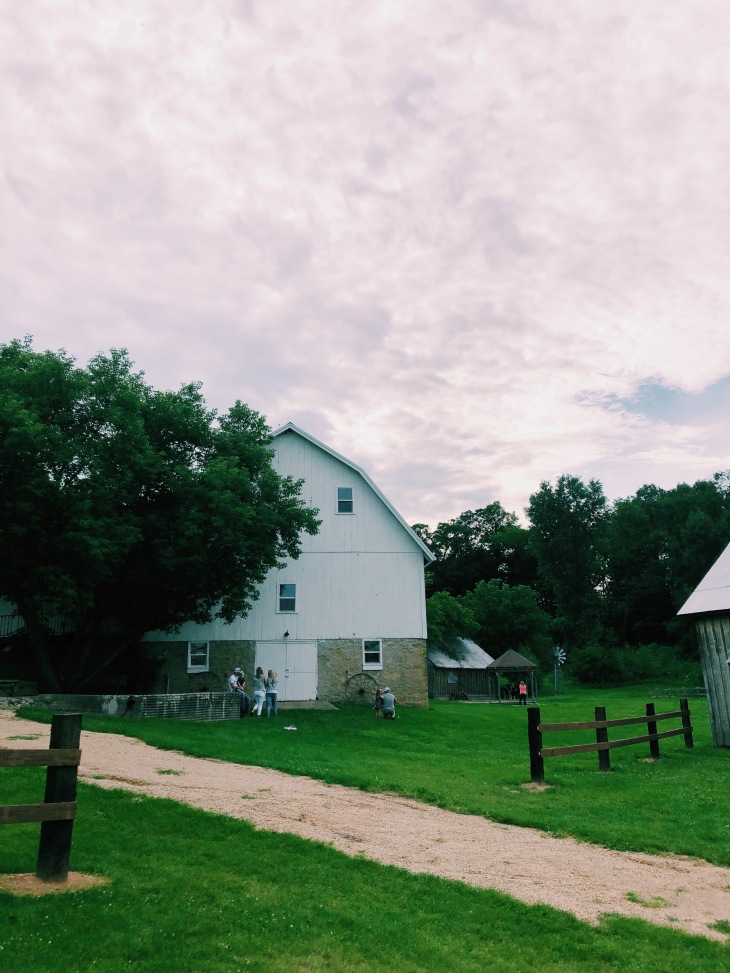 We backtracked a little bit but then winded down the road to the Stone Barn. It’s a stunning drive, just about 15 minutes outside of Nelson. Be prepared though – you won’t have cell phone service when you’re there (or at least we didn’t!) so make sure you know your way back to town.

One word to describe the Stone Barn: Wow. The farm site was so beautiful and situated on the rolling hills of Wisconsin. We arrived around 6pm and the parking was almost full! The space itself is beautifully kept and they have a barn, gift shop, and of course the main barn where you can order pizza.

The pizza is one size and it’s HUGE! We ordered 1 pizza and we basically took home half of it. We ended up choosing the supreme pizza and it was amazing – you could really taste how fresh the ingredients were! They have several options for pizza and a great beer and wine list to go with it! We had to snag a Spotted Cow of course. After dinner, make sure to try their locally made ice cream!

The barn has everything you need for pizza night too, so Eric and I decided to just bring some games with to play! There was also so many horses around at that time that it ended up being a magical night. It was definitely the perfect way to end the road trip.

Have you visited a pizza barn before? If not, don’t wait another minute! There are several around Wisconsin and a handful in Minnesota. Make sure to check what days they are open because most are only open 1-2 days a week. I hope you enjoyed the road trip and if you didn’t catch my stories, click here to see my story highlights on my Instagram!

Hi! I’m Lizanne- a small-town Minnesota girl living in the city. I enjoy adventuring throughout Minnesota with a latte in hand. I’m here to be your local scout and share all my finds with you! I’m always shopping and supporting local, so if you ever need some ideas – I’m your gal! My goal is to inspire people to explore more and create an inclusive community for adventure seekers out there. Follow along with my adventures and see what I’ve been up to lately!